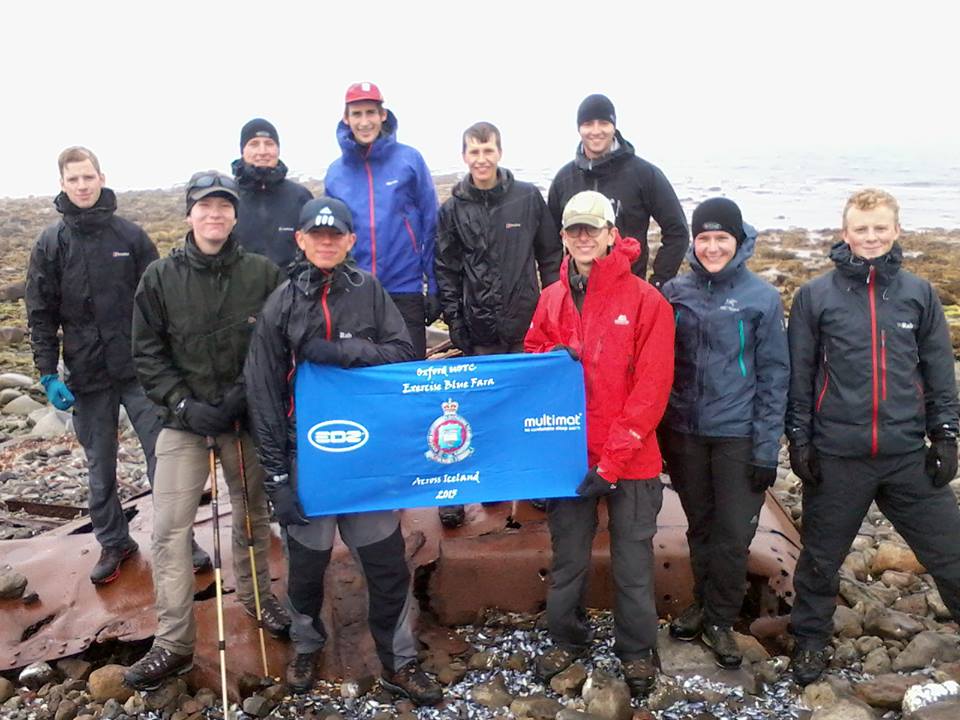 During August this year EDZ worked with a group from the Oxford University Officer Training Corps to provide them with Merino kit for a trek across Iceland on an excercise known as ‘Blue Fara’.  Here is how the team tell their story in their own words…..

This summer, eleven students from Oxford University Officer Training Corps set off to trek 500 kilometres, unsupported, from the north to the south of Iceland over the course of three weeks. They represented the universities of Oxford, Oxford Brookes, Reading and Gloucester and had taken up the trans-Icelandic expedition as a means of challenging themselves and doing something a bit more exciting and unusual with their summer holidays.

We had decided that the main aim of the expedition would be to complete the traverse completely unsupported, i.e. carrying all our food and equipment for 23 days. As we received and packed away the requisite 15 kilograms of food on the 12th July, the weight we would be carrying for the next three weeks became painfully real. That evening, we went to bed filled with excitement and anticipation. 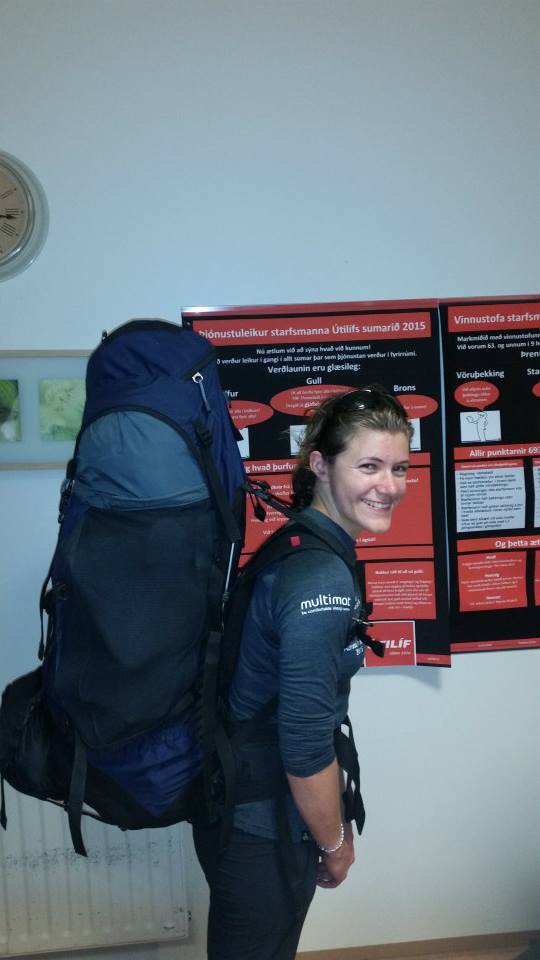 It had become very clear early in the planning stages that weight-minimisation would be a priority when selecting kit to take to Iceland. We had heard of the miraculous properties of merino wool and it sounded perfect for our needs. After a bit of research, EDZ emerged as one of the best merino suppliers and they very kindly agreed to support our expedition by providing a package of high-quality merino clothing. In days to come we would become incredibly grateful for their generosity; it performed brilliantly and made the tough conditions so much more bearable.

As we drove out of Reykjavik, the whole team was in awe at the incredible scenery for which Iceland is famous. A strange mix of flat lunar desert and mountainous Scottish heathland, Iceland’s diversity is unique. After more than a day of travelling, we arrived in the far north of this windswept Atlantic island and waved goodbye to our driver. Suddenly very aware of our isolation but in high spirits, we headed south in the horizontal rain that we would become well accustomed to over the next two weeks.

Our first 175 kilometres were our most difficult. Carrying approximately half of our bodyweight, we walked for eight hours per day along dirt tracks and roads. On account of our isolation, we had no choice but to filter all of our water, drawing it from lakes and rivers that we passed. Almost immediately, this became problematic. Iceland had an unusual Easter this year, experiencing significantly less snowfall than is normal. As a result, the water features that appeared on our maps were, more often than not, dry mud pools. Almost from day one, we were forced to adapt our plan to the unpredictable water sources, thankful for the flexibility that was built into our plan.

Despite constant rain and temperatures that never rose above six degrees Celsius, we walked well ahead of time for the first section of our trip, making extensive use of tracks and roads in order to speed our journey south, conscious of the difficult terrain that we would have to negotiate in the central highlands later on. As we did so, however, it became clear that the weather conditions were not at all what we had expected. Rather than summer conditions, we were experiencing winter ones: a low snowline, cold temperatures, persistent rain, and even snow. At the end of our eighth day, as we arrived in Myvátn, saturated by the constant rain, we abandoned the expedition on the advice of local rangers, who informed us that this was Iceland’s worst summer in over 30 years and that it would be seriously dangerous to continue. 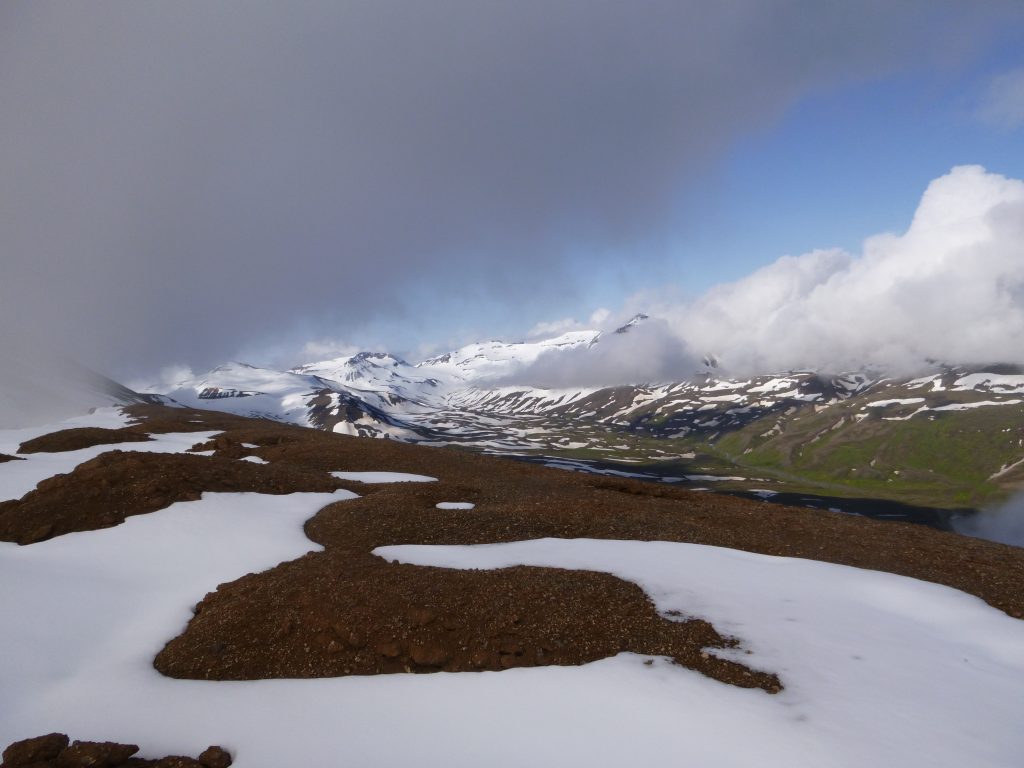 We spent that evening planning how best to make use of our remaining two weeks in Iceland, determined to make them a valuable experience even though we had failed to achieve our initial objective. We decided to head for Akureyri, a northern town that we had passed through on our journey north, and where we knew that there were accessible mountainous day walks. We spent a week exploring the mountains around Akureyri and experiencing a bit of Icelandic culture.

Determined to explore as much of Iceland as possible, we then travelled south to the Reykjanes Peninsula, near Reykjavik, where we joined the famous 130 kilometre-long Reykjavegur trail. Here, we enjoyed the postcard Icelandic experience, swimming in hot springs, crossing lava fields, seeing ancient volcanoes, and eventually reaching the coast. In contrast with the terrible weather that had blighted the first part of the expedition, we enjoyed beautiful conditions and warm temperatures as we walked the trail. We felt as though we had finally been rewarded for our efforts over the previous two weeks.

The weather may have let us down overall but the EDZ clothing most certainly had not. We were using long- and short-sleeved baselayers and leggings and would have been undoubtedly been much colder (and smellier!) without them. The same applied to the hats and neck-warmers; both performed admirably. All the clothing was subject to some pretty challenging conditions but responded impressively and we all agreed would be our first choice were we to attempt a similar trip again. The group were all thus tremendously grateful to EDZ for their generosity.